The Family That Plays Together 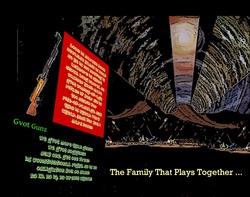 Hana Alvanic lay in the front part of the spacious family tent, an ear to the ground. She was listening to the vibrations in a 2 centimeter steel pipe which connected her tent to the one three meters away. Hana's hearing was so acute she had already heard Shamak give the orders to Bentriz next door. She elected to start preparations early. She raised her hand so Tzalima could see it, palm open, signifying "Get ready, but not yet."

For her part, Tzalima was listening to Beta team outside the far wall. Beta had been talking of things about which Tzalima knew nothing; Steelers, Packers, Cowboys, Redskins. As Stevic & Nagas had come into audible range, merciful silence had come over the men. Beta's discussions of what Tzalima had interpreted as Native American cattle rustlers running a meat processing plant come landfall had ceased.

Tzalima knew the ambush was coming. As the most senior woman, she was glad Hana was there. The youngest Alvanic family offspring had not yet developed into good marksmen, but Hana, under her Anglo name "Jane Seaton", had won an Olympic Gold Medal for the United States in shooting.

Tzalima smiled. If Universe continued to unfold as it seemed, this would be good practice for the four pre-pubescent children, Merik, Slanta, Temis & Alaba.

If one is too young for prayer, one may as well kill the enemy.

Tzalima also enjoyed the lovemaking with Hana, both with her husband, the usual Gvot prescription, and with Hana alone, which was tolerated by the Gvot only because it had proven to be inevitable. Kahima, the other mistress, had fallen into a deep funk after Hana had arrived. She had become inwardly unattractive, and whined and complained incessantly.

As it is inside, so it becomes without.

Tzalima would have gladly buried her under 5 centimeters of soil & then shot her through the dirt just to have done with her.

Kahima had seen the hand go up too, but her venture into wailing & crying had been cut short when Tzalima had managed to hit the right side of her face with a hot, wet towel from ten feet away.

Tzalima hissed at her. "Make sure the rifles are loaded, you pathetic cow! Make yourself useful or make yourself scarce!"

Dinner time was approaching after the elders returned from prayer, the last meal for 24 hours. Kahima decided to make herself useful. She picked up each of the five guns, checked the chambers silently, and handed a gun to each child.

Kahima looked proudly at her own gun, the handiwork of her own rite of passage. She had been a good shot.

Kahima would have gladly buried Tzalima under five centimeters of dirt & then shot her through the soil with it just to have done with her.

Then Kahima would be the wife. After a brief stint at Djeni Krekh for her own self-esteem, perhaps she would fuck Hana once more.

Their only previous encounter had resulted in the very first "Big T" of Kahima's 34 years. Since then, Kahima had wondered if it had been some flukish close encounter with death, something unique to her which would make her special or simply just another entry in Kahima's long list of things everybody did or had regularly on which she had missed out.

Hana turned her open-palmed hand into a fist and pulled down. She sat up & turned towards the others in the tent, making sure the stock rubbed in just the right place between her legs to give her what the Gvot called "The Big T".

Hana knew Osbakh knew all about "The Big T" and didn't give a shit. He'd put everything together just that way for that very reason.

The three women rose as one, united by an enemy they couldn't even see beyond the canvas. The children moved silently, marionnettes guided by the womens' hands.

Everyone's eyes tracked slowly across the canvas, following the slight noises of Beta Team, the faint shadows cast by the fire torches on the soft brown walls.

The four children sat, guns aimed at points about 2 feet apart, about one and a half meters above ground. Three women knelt behind them, one in each space as defined by the children.

The sounds of movement stopped at the corner of the tent.

The sounds of Nagas and Stevic approaching became louder.

Tzalima waited until Nagas and Stevic seemed to be at the tent corner.

Then, very quietly, she said "Mek."

There were a series of soft rustling noises as Beta team collapsed into a pile of surprised, warm death.

They heard Stevic's voice as he moved away down the path.

Tzalima looked proudly at her children, a hand straying to Hana's.

Kahima saw the movement and turned away muttering "Osbakh can do as He will, He doesn't have to fix the fucking holes in the tent!"