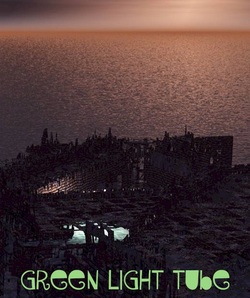 Behind the bulkhead door, Suzanne sat, cradling her knees. Leon stretched his legs out as best he could.

Hard right from where they hid without hope, they heard more short bursts of gunfire. They heard screams close to them. The hail of bullets hitting the bulkhead stopped.

Leon chanced a look through the glass slit of a window.

"We got some new players out there now. We not the only ones who hate these bastards! GHIZASZ!"

Leon Freedman threw himself away from the door, stumbling ungracefully over Hamid, his body shielding Suzanne's.

The explosion was huge, and there was a storm of steel shrapnel on the metal walls which hid them.

Something heavy hit the wall outside. Leon knew it was a body.

Leon wished he had some of the magical mixture from the jungle. He just wanted to shut the war outside them off.

He rolled off Suzanne, and sat beside her, uneasy at her quietness.

Suzanne barely shook her head. "Not yet, no."

They hadn't covered Hamid or closed his eyes. It was as if he were still talking to them of their lives.

"We should do something for his family." Suzanne wanted to pour meaning into Hamid's senseless death.

Leon grunted a little. "You should ask Dr. Stormer first. Gvot have a long list of Western world acts of kindness & charity which offend them mightily."

Suzanne tilted her eyes away from Hamid just to give herself a break. "Where did all these damned guns come from?"

Leon shrugged. "Where there are Americans, there will be guns. Most of us who really used them couldn't wait to get rid of them. We Americans fear death more than anyone else on the planet. That's why we wield it as a weapon."

Suzanne's head moved up and down so slowly, as if she were dreaming. She knew she was in shock over Hamid's death.

Gunfire continued, another grenade went off, ringing off their steel sanctuary.

Suzanne snapped to. "Great! Now we have another undeclared war against the Gvot on their soil."

Leon scratched his shin. "We're a nation of angry, fearful people at times."

Bullets rang off the metal right outside the tube. Something slapped up against the hatch. Leon saw blood cover the glass viewport.

Suzanne had seen it too. She was recovered enough to feel afraid. "Shit! That was a little close. My inner angry, fearful child woke up."

Leon allowed himself to laugh a bit, not three feet from Hamid's body. "You funny, you know that?"

Suzanne was crashing a bit after adrenalin, death & shock. "Ever wish you actually had an angel looking out for you? I don't mean the New Age style, but some tangible creature who could just show up in space right when you ..."

Suzanne raised up a little then tailed off, looking beyond Leon.

Leon opened his eyes. "What's up?" He followed her gaze. "Ghisasz! What is that?"

They got their answer when Aggie Brooks banged really hard on the outer bulkhead into the airlock.