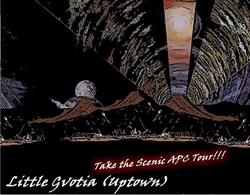 "Delta should be headed right at him, I moved McCrimmon's Team over to cut him off."

Morrissey grunted. "Whoever this is, this is homefield advantage for him. Delta or Epsilon better have eyes on."

"That's true. Let's get on up to the end of this pathway, maybe we can get a sense of who's got this guy."

Twenty meters away, they heard a young voice yelling, then screaming out orders.

Morrissey called out "Time to go, people!" and Charley Team abandoned caution and raced to the end of the path.

There was more shelling, then the sounds of a quick burst from a semi-automatic, a bullet ricocheting off the metal behind the canvas. To a man, Charley Team ducked.

Behind them a quiet voice said "I don't think that's a very good idea, Major."

Boyette turned back to see an array of semis pointed towards them. Behind them, he could see another group of similarly-armed Gvot moving across into what Boyette knew was the path where Delta company was operating.

"Order your men to drop their weapons now."

Boyette had little choice. Most Gvot were disciplined shooters & skilled marksmen. "Tell the team to drop their weapons, Morrissey."

"Leave the guns where they are. Drop your Voxbox, and you'll be escorted out safely. Otherwise, you die here and now."

Everyone jumped when the firing in the next path started. Boyette was fairly sure Delta Team had been slaughtered.

Stevic waved to two of his team. "Take these people to the ramp. If you see others on the way, kill them."

Ravanic & Kampal nodded grimly, and motioned Charley Team to head back towards the ramp.

As they left, Stevic moved his men forward. Once in place, he called out "Shamak!"

A voice came back from the next path. "This alley is clear! To our right is another team, but I think we are missing something."

Stevic suspected as much. "Where are they?"

Shamak yelled back. "Tags here say "Delta", the ones to our right must be Epsilon. You had Charley, so back to the side we came from should be Alpha and Beta."

Stevic wasn't in the field that often since his revolutionary days. "It is what they do?"

Shamak was pragmatic. "I think so. Also, it's because they don't understand the Greek alphabet. They are not Ashkenazi, these people."

Stevic couldn't help but smile despite the circumstances. "They wage war with the reactive mind. Can you take out Epsilon?"

Shamak was pretty sure Epsilon could hear him. "We think they may be open to negotiations."

Stevic smiled again. "Good. We will sweep back the way we came to find Alpha and Beta."

Stevic's men moved off. The man he had singled out crouched down, weapon at the ready. Stevic dropped down in like fashion. "We need to get you somewhere safe right now."

Nagas looked at his friend and ally. "I know. This skirmish was all about Hamid getting them to this bulkhead, yes?"

Stevic nodded. "There was nowhere else close."

"But not 40 meters from here is the port bulkhead."

Stevic agreed. "Very well. We double back and move over two paths; the bulkhead will be a straight run for you."

Nagas nodded in turn. "It will be safe enough once I'm in it. Getting there will be problematic."

Stevic glanced in the direction his men had departed. "When we hear gunfire, we will know. Come, we will move over one pathway."

Stevic smiled. "He is talking to the tents."

"You know him well?"

Stevic rose and waited for Nagas to do the same.

Stevic sighed. "More than I would like. He is screwing my daughter."

Nagas' eyebrows rose. "So you wish him to die, or to survive?"

Stevic shrugged. "If he lives, he is worthy of her. If he dies, she has her girlfriend."

Their walk was punctuated by four shots. Stevic guessed correctly Epsilon had just been reduce in size by half.

Nagas seemed satisfied. "Talking to the tents worked, it seems."

Stevic shrugged again. "Good for him. May his parents come up with a decent dowry."

The two old friends shared a quiet laugh and walked together into the ambush by Beta Team.
Proudly powered by Weebly