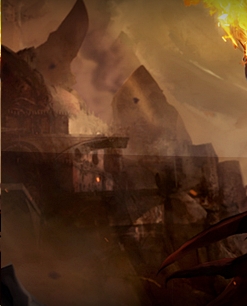 His fundamental issue was that almost everybody could intuit that he was an asshole.

Even Mudrakh's own mother knew he was an asshole.

Mudrakh had been stuck with the job of being a professional asshole on the pre-prayer shift in Little Gvotia at the top of the ramp from the laundry room.

Because Gvot assholes smoked, Mudrakh was standing just inside the laundry room, so as not to despoil Gvot territory with the small, untidy pile of ashes & butts he was accumulating.

Mudrakh's fundamental issue was erased forever by the long, sharp blade which slipped easily through the soft part of his body above the neck and below the skull, into his medulla oblongata, turning every signal in Mudrakh's body into dead air.

The gentleman providing this public service was also considerate enough to crush Mudrakh's last smoke out in the interest of public safety.

By some heretofore unseen miracle, in spite of having applesauce for a neural pathway, Mudrakh managed to defecate in his trousers on the way to the floor.

Oddly, no one was surprised that Mudrakh had managed this one last gesture on behalf of assholes everywhere.
Proudly powered by Weebly