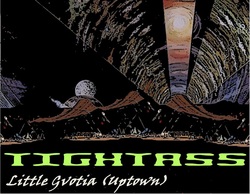 Alpha Team was always the purview of Captain Titus Andrakh.

The only time personnel changed was when people were lost in combat, or when they retired. The ratio of retirees to deaths on Alpha Team was exactly 11 to one. The one loss had been in Afghanistan, back on Earth, when TK had been taken by an IED.

Three men, three women, only one Titus Andrakh. They were like an incestuous family. Downtime would find them still together as a group, with an astonishingly small amount of drinking and a lot of sexplay.

As a group, they cared little for Boyette even though he had asked special permission from Melf and Richardson to import them into his private army. They had taken special care to each thank Boyette for that publicly.

They didn't seem to think they owed him any more than that. They made Boyette look better.

On this mission, Andrakh felt more hostility than usual. Andrakh's mother had been from San Diego, but Andrakh's father was pure Gvot.

Every mission, it was the same drill. Take Boyette's orders, be the first ones to deploy, find private ground and redefine the orders so that they would work.

As Beta, Charley, Delta & Epsilon were approaching their assigned areas of deployment, Andrakh was delivering a quiet class in Gvot life just outside the ring of sand on the floor.

"There's no point doing what they're up to. Every tent you see has a gun in it, at least one, and the gun is pointed at us. We Gvot have no use for radios. We use messengers, hand signals, steel pipes connecting each tent, even fucking tin cans & waxed string. Got it?"

"Aye, Boss." Everyone together, "aye" and "boss", a little SEAL history lesson Boyette's private army could have used.

"This isn't a mall in LA. It's not a fucking supermarket, you can't just walk down the aisles to the peanut butter and coffee, pick up two people the Gvot are protecting and walk out." He nodded back over his own shoulder. "Half those people will be dead in 10 minutes. Do you want to be one of them?"

"What they do is have two of everything, they hide it well, they'll have weapons cached in at least two places down here, and we win if we get there first. Stay low, wait for the first shots, watch my hands and do *not* fucking stand up unless I specifically tell you to do so, clear?"

"They will have the whole fuckin' shooting match here some place. When Boyette lights up those guys, Gvot will be either in the Lakkat at prayer or lying flat on the ground, inside their tents, waiting for some dumbass to come waddling by and they're gonna just fuckin' kill them, just like that. You feel like dying tonight, Gomez?"

Gomez squinted at him. "No, boss."

"Fuckin' right 'no, boss', Gomez, good for you! One thing we know is whoever the real Gvot players are tonight, they're not at Lakkat, they're in the tents, and when the balloon goes up, they're gonna shit bricks ten feet high, leave the tents they're hiding in and lead us right to our objectives. Got it?"

Gomez put her hand up.

Andrakh looked at her with a straight face. "You couldn't pee before we left?"

She shrugged. "Urge wasn't on me."

It was an old joke, based on a real event in common experience.

Alpha company shared the laugh quietly, then began to spread out by rolling silently away into the smoky darkness of Little Gvotia.