Lies We Tell The Dying 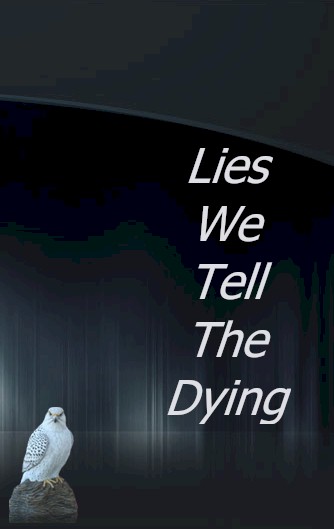 Hamid Khelar usually ran with a purpose, eyes in front, his entire body pushing forward, his whole being intent on being the fastest of his peers.

Tonight was different. First & foremost, he was supposed to be in prayer, but mostly his distraction came from his certain knowledge that the Rotak - the man with red-hair - was here to harm either Copernicus Rade Nagas or Suzanne Devereaux & Leon Freedman. The latter were zenit, foreigners, but Hamid had found Suzanne surprisingly attractive for someone so old, and her father seemed rather pleasant and even funny on occasion.

He liked them, even if Khirpak had criticized them openly because the old man and his daughter fucked a lot, and the woman was known to have forced perversions onto both Stevic & Nagas, or so Khirpak had said.

Hamid's upbringing told him incest & sexual perversion were quite wrong, but he had recently spent several stints in the stalls of the public washrooms working feverishly to destroy the erections the mere thought of Suzanne seemed to precipitate.

Fate delivered a whole new way to destroy erections when Hamid passed the second alley between the tents.

Footsteps on the ramp. Not loud, but worse. Zenit, sneaking down the ramp as the Rotak had done. Lots of them.

Hamid froze behind the next tent he came to.

He thought about turning back for an instant.

At that point, his Gvot upbringing crept in.

He would do something dangerous and noble simply because it was the right thing to do.

Hamid peered out cautiously from behind the tent. He saw the men split into groups. He watched the groups break away in turn, stealing cautiously and silently along the walls, among the tents, clearly looking for someone.

He looked over his left shoulder, in the direction of Suzanne Devereaux's tent.

He rose & broke into a run.

Without care for his personal safety, Hamid trusted all to his speed, familiarity with his surroundings, and desire to do the best he could for the zenit they hosted.

Seventeen seconds into his run, Hamid Khelar was sighted by Delta Team.

Twenty-three seconds in, the man who would kill him knew where he was. He was adjusting his men to close in.

Thirty-one seconds in, Hamid arrived at the embers of Suzanne & Leon's fire.

The tent was jiggling behind the fireplace.

Five seconds later, Hamid knew all he would ever know about the act known colloquially as "69".

It stopped him dead silent for a beat or two. He'd never seen a woman on top before. Surely they had odd customs, the zenit.

"You must stop what you are doing! There are bad men coming for you! I know where you must go, but you must come with me now!"

Suzanne & Leon scrambled to dress, the urgency in the boy's voice unmistakable.

Leon was ready first, and Suzanne had pulled jeans on and was opting for the cross-trainers given the actvities ahead.

As she did up the laces, Leon placed a hand on Hamid's shoulder.

Hamid pointed off to their left. "They came down the ramp after Rotak. I saw them on my way over."

Leon glanced down the closest wall. No one. Charlton McCrimmon had already pinched Epsilon Team left and was in the next path over.

"We goin' that way?" Leon looked right. Suzanne was now standing with them.

Hamid saw where Leon was looking. "Yes, down there is a maintenance bulkhead, it is there we must go!" He looked at Suzanne. "You are ready so soon?"

Suzanne made an odd noise before answering. "Years of practice."

Hamid was the boss now. "Keep down, stay against the wall, head along the canvas wall covering until you see a green glow behind it, then we go under, we go in the bulkhead and lock it, otherwise we are trapped!"

Hamid could smell sex and adrenalin. He would never be any more alive than he was right then.

Leon broke right first, staying low as his own training had taught him. Suzanne followed, surprising Hamid with her speed and agility considering her age, which he guessed must be at least thirty.

Hamid gave one more glance down the wall to the left, saw no one, and sprinted hard after them, overtaking Leon in a few seconds. He reached a hand back. "You must stop now."

Suzanne stopped right behind Hamid as he scouted the alley. Her hands came to rest gently on Hamid's hips from behind. Hamid felt a brief moment of pleasure before he saw Epsilon Team's leader fix his eyes on them.

No time for finesse.

Suddenly there were voices coming from all directions as the hounds got the scent.

"There! We are almost there!" Hamid was screaming.

"We gat company." Leon was used to being quiet in combat. He grabbed Suzanne's arm to guide her onto his right flank.

Suzanne could see the green glow behind the drab canvas. "I see it!" She speeded up, now pulling Leon with her. "Hamid! It's here!"

"Yes! Yes! Slide under the canvas & smash the light!" Hamid slowed a little and let them pass him.

Suzanne & Leon gave an extra burst of speed and slid under the canvas right at the green glow.

Shots rang out and clanged hard against the iron wall not 8 feet from the bulkhead.

A head-first slide would have saved the boy's life. Going in feet first meant that McCrimmon's second and third shots hit the boy in the back. One passed an inch below his heart.

The other found its way through the bottom of Hamid's right lung, ripping open his liver.

Leon knew it was bad from the volume of blood which arrived under the canvas with Hamid.

Suzanne and Leon dragged the boy into the bulkhead and locked it tight. Gunfire continued outside, rounds rattling off the bulkhead door.

Suzanne ripped off her outer shirt and was reaching to stem the blood flow from the wound underneath Hamid Khelar. Leon stayed her hand.

Suzanne folded it up and slipped it under Hamid's head instead.

"You did good, Hamid." Leon was saying good bye.

Suzanne smiled at him bravely. "You just rest a bit, you got us to safety, you're my hero." She kissed his lips softly and whispered "Thank you."

Hamid still had enough going for him that he experienced pride and pleasure. Hamid's god was apparently one who delivered mercy after the damage was done.

Neither of them felt like smiling, but Suzanne & Leon smiled anyway.

Leon leaned in to his ear.

"It's the most fun you can have for free in the whole wide world."

Suzanne managed to grin for her dying hero. "I'll teach you when you feel better ..."

Hamid smiled widely as life poured away. "You will ... ?"

Leon ad-libbed. "And I'll show you where the tricky parts are ..."

Hamid's smile began to widen further, but then the blackness took him away, his eyes dimmed, and his spirit passed.

Suzanne and Leon huddled together again, weeping unashamedly, still holding the husk which had been Hamid Khelar.