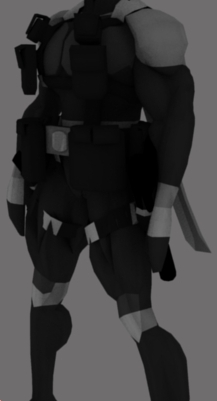 Major Garland Boyette surveyed the repugnant remains of Mudrakh Senelrak at the top of the ramp.

He didn't even look behind him, just gave his orders in a low murmur.

"Lewicki, Gagliano, stow this sack of shit out of the way."

Two grunts behind him stifled their unhappiness with the assignment and moved up, dragging Mudrakh over to the wall of the laundry room.

Boyette was also unhappy. Clearly Ops people had arrived before them. In Boyette's experiences with them on Earth, that had never been a good thing. If it was the red-haired man whom he often met coming or going from Melf's office, it boded worse. The man worked alone, and often left a mess behind him which Boyette would have to clean up.

Lewicki & Gagliano rejoined the squad, and Boyette turned to face them.

"Remember, most of these people will be at prayer in the Lakkat just to your right at the bottom of the ramp. We don't have to disturb them. We need to move quickly & quietly through the tent area and look for these two people."

He held up the pictures of Leon Freedman & Suzanne Devereaux. "We need them alive, not dead. You have guns if you need them. They are not for killing these two people. Every Gvot man, woman or post-pubescent child has a single-shot rifle. There are a hell of a lot more of them than there are us. I'm with Team Charley. Any questions?"

Boyette looked around at the faces of his men. Nothing.

"Very well, move quietly down the ramp, split into your teams and use text, not voice. This is a stealth mission, keep it that way unless you get in serious trouble. Move out."

So it began, no talking, just a quiet, orderly procession down the ramp. Their boots made a little too much noise for Boyette's liking, but the men were even making an effort to keep that to a minimum.

The last 10 meters of the descent, the sounds of prayer from the Lakkat began to filter into the ears of the squad. As they were xenophobic by nature, the men's heartrates increased, and Boyette could feel the fear build all around him.

"Steady, people. It's prayer, not guns."

They reached the bottom of the ramp.

Not a soul to be seen.

Boyette made the hand signals to his team leaders. Five teams formed from the phalanx. Alpha Team moved hard left along the wall, Epsilon Team hard right, Charley down the middle, Beta between Alpha and Charley, Delta between Charley and Epsilon. Boyette moved in behind Charley, Voxbox in hand, and the sweep of Little Gvotia began.

Twenty meters in, Boyette sent a single question mark to each team leader. In a few seconds, he had a single character zero response from each team. He had about 5 seconds to reflect on that before Charley point raised his hand, made a fist & pulled down on it in the air.

Reflexively, everyone in Charley Team sank quietly to one knee. Boyette kept his head raised and crept up beside the team leader. Morrissey was highly skilled. Boyette trusted him.

Morrissey gestured to a gap between the tents just to his right. Boyette peered in that direction in the half light. In a second or two he saw movement, a flash of light clothing moving at a good clip.

Boyette knew that Delta company would be seeing the same thing in a second or two. He flashed a quick message to Delta point. Two letter "i"s. Eyes open. Then "12", dead ahead.

In 10 seconds, Delta sent word of visual contact. Boyette flashed "g" for "Go" to both Delta & Epsilon. He tapped Morrissey's shoulder, and made a motion they should bear right & follow Delta and Epsilon.

Morrisey silently set the orders in motion, and Charley moved forward and took the first right turn between two tents.

Boyette was thinking ahead, as usual. He stopped moving long enough to flash a message to CMac, leader of Epsilon.

Two characters, both ones. They're on your eleven.

Charlton McCrimmon looked at his Vox. He gestured to the men behind him.

Veer left one row of tents.