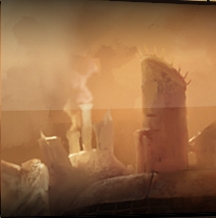 Hamid Khelar, for all his 15 years, had been devout, courageous, honest & enterprising. He had just enough humility about him that he was unaware the elders of Little Gvotia saw in him the qualities they needed in those who would succeed them.

He waited with Iamouk, Felka and Kheris, looking up as the sunshield crept across the glass above their heads, the best Redstone & O'Brien had been able to engineer by way of a sunset.

Sunset, Friday. Shammoth, the prayer beginning to the Gvot custom of fasting for a day.

Four Gvot teenagers waiting for the sun to go down as best it could on L5.

Darkness on L5 had been transformed from a time of rest to a time of great anxiety by a madman with a taste for warm flesh cut with cold, razor-sharp knives.

Hamid felt his friends' nervousness steal into their hearts as they watched the light diminish.

He glanced back up at the sunlight at exactly the wrong angle. He covered his eyes, and turned away quickly, dropping to one knee. The giant reflectors dwarfed the sun of Earth.

He kept his eyes closed until the after-image was gone.

When he opened them again, he was looking up the empty ramp down from the laundry room.

He saw Mudrakh slump silently to the floor. He saw the red-haired man begin to path his way down, moving with great skill from one side of the ramp to the other. From behind the dumpster on Hamid's right, down to an empty laundry cart.

An empty laundry cart like the ones in which Hamid and his young friends would joyride when youthful high spirits trumped Gvot family discipline.

A foreigner at prayer-time, a man with death on his hands already, a man of great stealth & obvious skill, daring to enter Little Gvotia.

Suddenly Hamid was moving, ignoring the urge to prayer from his friends.

Little Gvotia looked almost empty, the paths between the tents were familiar, and Hamid made quick work of the secret entrance he had shown Suzanne Devereaux.

Through the smoke he could see the brilliant silver sheen of Khirpak's tent.

He sprinted the last 70 meters and dived into the tent opening.

Khirpak was already praying. He was both startled and angry at being interrupted.

Both emotions had vanished by the time Hamid had finished his story.

Khirpak didn't hold his position because he was slow-witted.

"There are only two reasons to risk coming here now, when we are defenseless! Hamid, go to Freedman and Devereaux, get them hidden. I will take Nagas to safety. Run!"

One word is all it took for Khirpak to send Hamid Khelar into the last minutes of his existence.
Proudly powered by Weebly