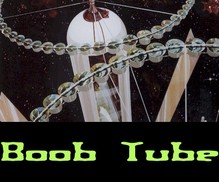 Suzanne sat back against the wall of the Joffrey Tube.

Leon was still peering through the glass.

"I know, I just can't see a damned thing. Those visors are reflective for safety purposes. I have no idea who it is." He uttered a small grunt as another thick gloved hand came into view. "Hmm. There's two of'em."

Shots hailed against the outer wall, startling Suzanne into getting back up. She didn't quite push Leon aside, but her gentle hand had the same effect. She peered out again.

Leon squinted a bit. "Just how d'you suppose he's gonna do that?"

Suzanne pursed her lips. "Ah, yes, space and all that that entails."

Leon managed a grin. "Space is funny like that."

Suzanne slapped his chest with the back of her hand gently, as she watched the suit back away until it was completely in view.

Then Suzanne giggled. "How do we get this thing open, do we know?"

Leon wasn't aware of a recent consensus about opening the hatch. "Why do we wanna do that? We don't know who the hell they are."

Suzanne grinned. "Because the 'guy' in the space suit isn't a guy. I think it's Aggie & Rails."

Leon rose up again. "How d'you figure that?"

Leon peered out again. The seemingly disembodied figure slowly made two cupping movements in front of its chest.

Light dawned on Leon. "It's Aggie."

Suzanne's smile disappeared. "It could be either one. Rails is ... ummm .. rather deceptive in that department."

She had a faux smile painted in place by the time Leon looked at her.

"Yes, I know this because." Suzanne replaced "faux" with genuine Southern lady.

Leon had turned serious. "That red glare off her helmet there? That's the status light for the bulkhead. It's red, so this little compartment between the bulkhead doors is pressurized."

Suzanne looked around. "So we're looking for something on this panel?"

Leon turned and joined her. "Yeah, plus there's usually a hydraulic manual as well in case the power's out."

Suzanne lifted a metal plate which was loose at the front & hinged at the back. "I'm thinking possibly a two-inch diameter red button with "Depressurize" on it might be a good clue."

Leon reached over & stayed her hand. "Not yet. We gotta let them know what we're doing because they'll need to hang on. It ain't big, not a lot of air in it, but it could still punch somebody's one-way ticket."

Leon was thinking. "This is a service bulkhead. There has to be a radio."

Suzanne was following him. "How do we know if they're talking to anyone?"

Leon was matter-of-fact. "Only people with space suits are the Air Force."

Suzanne smiled dryly. "Welcome to the Military Industrial Complex. Do you know how to work today's Blue Light Special?"

Leon was feeling for his lighter to make motions through the glass.

Suzanne smiled. "Oh, it's like the little man in the canoe!"

Leon grinned. "Yeah, you get more bang fer your buck if ya wiggle it a lot."

Suzanne kept smiling. "And I'm so glad you know that, Mr. Freedman!"

There was a long pause while Leon motioned side-to-side with his lighter.

Suzanne had no idea what to say on the radio. She flipped the switch up & said "Commander Erhard."

Suzanne hadn't run across Jimmy Fenster before. "Whom do I want?"

Then a woman's voice. "Pettigrew."

"The one and only. You all right? Why are you in the tubes?"

"Long story, not all good. Is this Aggie & Rails out here?"

"Can you tell them we're going to decompress the hatchway?"

"They're tethered on now, do your worst."

Suzanne nodded at Leon hovering above the button.

The decompression was fast. Suzanne & Leon listened as Aggie & Rails worked the external lock, and within a few minutes, the outer hatch door way opened, and the women squeezed in.

They pulled the outer hatch closed, and locked it with the wheel.

Suzanne hit the switch to Eileen Pettigrew. "They're in, the outer hatch is sealed."

Suzanne did as she was bid.

In two more minutes, the population inside the Joffrey Tube was doubled and Leon was helping shut down the precious oxygen tanks and helping Aggie & Rails with their helmets.

Suzanne spoke to Pettigrew once more. "Ok, Eileen, they're in. Thank you."

The relieved smiles in the tube vanished when Pettigrew replied.

"Thank you for testing the integrity of the inner seal."